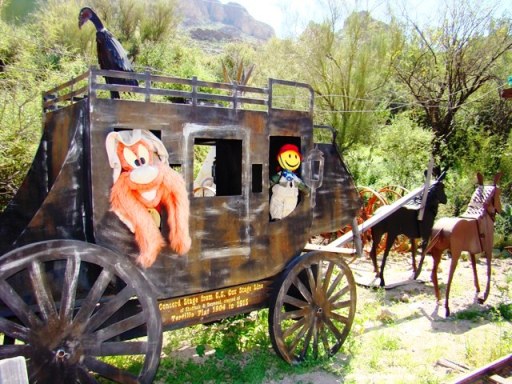 Make sure you allow a full day for the drive since you will want to make frequent stops to take pictures and visit the interesting sights along the way.

More than 1000 years ago, the Apache Trail existed as a footpath used by
Native American Indians like the Salado, Apaches, and the Yavapai.
The Salado used the trail to go between their seasonal homes in the
lower desert and mountains. The Apaches and Yavapai used it in their
raids against the Pima Indians.

Getting there and where to start:
The largest nearby major road is US 60, which runs east out of Phoenix.
Take the Idaho Rd exit, go north a few miles, and follow the signs for
Arizona 88, which is also known as the Apache Trail.

Apache Trail: What to see along the way:
There are many things to do and see along the way, so we visited the
Apache Junction Chamber of Commerce to get a map and some information to
help us plan our day.

Our next stop was at the Goldfield Ghost Town. Goldfield
sits on a small hill between the Superstition and the Goldfield
Mountains. The town had its start because gold was discovered in the
area in 1892. The town grew rapidly but died almost as fast.
Unfortunately, for the town the vein of high-grade gold ore soon became
low grade until it was not worth the effort to dig it out of the ground.
By 1898, the town had become a ghost town.

The Goldfield Ghost Town now features gunfights every hour on
Saturday and on Sundays at noon through 4 PM. Several other features of
the town are the underground guided mine tours, the only operating
narrow gauge railroad in Arizona, jeep tours of the Superstition
Mountains, horseback adventures, wagon and carriage rides. Lodging and
camping are available at the Ghost Town, as well as Sunday services and
weddings at Church on the Mount

After Goldfield, we continued on the Apache Trail as it wound
into the mountains around Canyon Lake and then dropped back down to the
town of Tortilla Flat. The road had many curves and two single lane
bridges. The speed limit is about 25 miles per hour for most of the
trip to Tortilla Flat with some turns that are even slower.

Go slow and enjoy the breath-taking vistas. There are several
places along the way that allow for stopping on the shoulder where you
will want to take pictures. One of the prettiest is the overlook at
Canyon Lake. Take an opportunity to view the lake and read about how
it was formed. Canyon Lake also has a marina and an RV park.

It was interesting reading about all the owners of Tortilla Flat, the many famous people that have visited and how Tortilla Flat got its name.

The town celebrated its 100-year anniversary in 2004. The town has a restaurant and saloon, BBQ Patio, Country Store, museum, Post Office, a gift Shop and six full time residents.   If you go make sure, you stop and eat at the Tortilla Flat Restaurant and Saloon – known for its great burgers and a “Killer Chili.”    Don’t be put off by the long line for a table or seat at the bar. It is worth the wait and you can check out the place while you are waiting.

The inside of the restaurant is covered wall-to-wall with dollar bills – read about the origin of the custom at the museum.   Another novelty of the restaurant is that some of the seats at the bar are made from real saddles. For dessert, visit the Country Store and get one of their famous Prickly Pear ice creams.

If you decide to travel on towards Roosevelt Dam, you will first have to
cross the flats where at time it floods. There was only a small
puddle across the road the day we crossed. About five miles past
Tortilla Flat, the Apache Trail turns into a dirt and gravel roadway.
There is a place to stop just before the road changes to dirt that has
wonderful views of the desert. Don’t pass it by, since it doesn’t
look like much from the road.

The dirt portion of the road has some wonderful views of the
canyon/gorge and affords views of some of the most spectacular and
beautiful sights you will find in Arizona. There are several great
places to stop. A stop at the bottom of Fish Creek Hill gives you a
chance to watch the cars and large vehicles navigate the twists down
Fish Creek Hill. Beyond Fish Creek Canyon look for a famous landmark
called Geronimo Head.

Another favorite sight is the view of Apache Lake from the
overlook. Apache Lake also has camping, a marina and a restaurant.
Take a minute to stop before moving on to Roosevelt Lake and the Dam.

Roosevelt Dam and Lake:
Construction of the Theodore Roosevelt Dam began in 1903 and it was
completed in 1911. Once it was considered the world’s tallest masonry
dam. The lake formed by the dam measures about 22.4 miles in length,
has a shore line of approximately 128 miles and at its deepest is 188
feet deep. The lake has extensive recreational facilities.

Apache Trail: CAUTION:
By the way, you do not need a four-wheel drive vehicle to go on the dirt
road.    Our front wheel drive 2003 Saturn L300 sedan had no problems
navigating the road. However, there is one section that comes down Fish
Creek Hill that is very steep and very narrow… and there are portions
of the road where there are hairpin turns and only one vehicle will fit
at a time.

We would not recommend the dirt portion of this road for a driver
that has a fear of heights or is not confident in their ability to
drive in close quarters.    If you are considering taking a motorcycle on
the dirt portion, think twice…or longer.   There are many places
where the road is like a washboard and deeply rutted, to say nothing of
the curves and steep grades.    A lot of hard work and missed views.

What to do in the Apache Junction/Mesa area:
There are many activities available in the area. Enjoy camping,
hiking, bird watching and mountain biking in the Superstition Mountains,
Tonto National Forest, and the Lost Dutchman State Park. We got in a lot of hiking amidst the lovely spring flowers.

Perhaps you want to consider a tour from one of the local tour companies, such as
Apache Trail Tours.
Golf at one of the many golf courses.

Line dancing abounds at many of the local communities. Here are a couple websites: azbodydance.com and ucanlinedance.com.
Show up at one of these lessons and you will probably uncover even more local dance venues.

If you have a motorcycle, there are some great roads to travel.
We hooked up with the Superstition Mountain Harley Davidson
dealer-sponsored club and joined them on some of their rides.

There is a swap meet/flea market in Mesa..
And of course the downtown areas offer shopping, movies, cultural events
and a variety of attractions.

If you are looking for a good choice of hotels with discount prices, visit where to stay in Phoenix for more information.