We spent almost three weeks in the Black Hills and only scratched the
surface of things to do. The area is packed full of activities to suit
a variety of interests.

We toured as much as we could in the Black Hills area, while
still allowing some time to just enjoy the amenities of Hart Ranch.
Here are some highlights of places to visit and things to do: 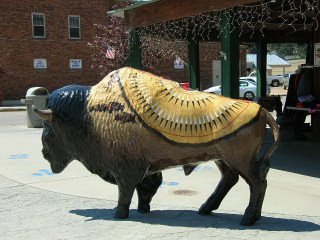 Mount Rushmore: Probably the most well-known attraction in this area, be sure not to miss this one!

Custer State Park: We spent several days here and think it is worth its own page. Read more about the extensive and beautiful Custer State Park in the Black Hills of SD.

Custer: The town of Custer can be visited on the way to
the Crazy Horse Memorial. It has a few interesting shops, an art
gallery, museum and places to eat. As you On the west side of town,
the Purple Pie is the place to stop for a delicious homemade treat.
While we were there, we also saw more of the bison sculptures that were
being displayed in various parts of the Black Hills — part of the
preshow buildup for the October Buffalo Stampede that is held in Custer
State Park.

Crazy Horse Memorial: This monument has been a work in progress
since 1949. Located north of the town of Custer, this is destined to be
the world’s largest mountain carving. It offers an orientation center
with a movie about the Memorial. In addition it has other interesting
exhibits such as the Indian Museum of North America, a Native American
Cultural Center, a 9-foot statue of fighting stallions and the evening
“Legends of Light” laser show (seasonal). We did not visit the Memorial
itself, other than to sneak a roadside peak while we were going through
the area.

Deadwood: Relive the old west while in the Black Hills.
The history and legends make this a worthwhile stop. We don’t gamble
and found plenty to keep us interested in this landmark city. Read about Deadwood here.

Hot Springs area: In the southern part of the Black Hills
is the town of Hot Springs, known for the natural mineral spring water.
At one time, the Lakota and Cheyenne Indian tribes fought for control
of the natural warm waters. From what we could tell, the warm waters
have been turned into an indoor water park called Evan’s Plunge and the
Springs Bath House (we didn’t pay the admission price to investigate
either).

Besides these two attractions, you can take a walk through a city
park to take a drink from the Kidney Springs fountain, and drive or
take the steps up to the upper part of town to visit the Pioneer Museum.
There are bike trails and a golf course in the area .
We did make the rather precarious drive up the deeply rutted gravel road
to the top of Battle Mountain.   We had seen this drive noted in one of
the tourist brochures as Skyline Drive, although it was not marked as
such once we got to Hot Springs.   There is a nice view from the top –
but be warned that the road is only suited for high clearance vehicles
(we had a 4X4 pick-up).   Definitely do not try to turn in with your RV!! 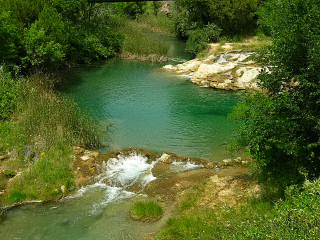 Other key attractions in this part of the Black Hills are the Mammoth
Site, Wind Cave and Black Hills Wild Horse Sanctuary.

And about 10
miles south of Hot Springs, visit Cascade Falls picnic area where you
will find a lovely little swimming hole.

Mammoth Site: This was worthwhile visit. This is an
active archeological dig site where mammoth fossils were uncovered in
1974.   To date, over 53 mammoths (Columbian and Wooly) have been
uncovered, as well as giant short-faced bear, camel, llama, coyote and
28 other species.   The dig site has been has been enclosed in an indoor
interpretive center.   Take the guided tour and then browse through the
exhibits on your own.


Wind Cave: Another worthwhile attraction, this National Park is
one of the world’s largest caves and more tunnels are still being
discovered. Do not expect to see stalactites and stalagmites.   The cave
is known for its boxwork formations and the history of its discovery.
You must take a tour to enter the cave (you cannot explore on your own).
The tour fee is not covered by the National Park Pass.   There are 3
different tours that run daily, exploring different parts of the cave.
They take about an hour and a
half.   There are also two special tours that run seasonally and require
reservations – the 2 hour Candlelight Tour and 4 hour Caving Tour.
Cave temperatures are always 53 degrees, so plan to bring a jacket or
sweater. In addition to the cave tour, there is a film and nice-sized
exhibit center.

Black Hills Wild Horse Sanctuary: We did not have a
chance to visit this attraction, but it sounds interesting. You can
take a 2-hour guided tour in a small bus for about $20 for adults, where
you will see the wild horse herds. There are photo stops, as well as
stops for the Crazy Horse movie set, the scenic overlook of the Grand
Canyon of the Cheyenne River, the Native American Sundance ceremonial
site, Indian petroglyphs a prairie dog colony, etc.

Spearfish There are a few attractions in this town in the northern edge of the Black Hills.

Passion Play is performed in the summer months, recreating the
dramatic events of the last 7 day of Christ’s life on earth. There is
also a backstage tour and museum. We heard that early arrivers can
volunteer to be part of the masses.

Spearfish also has the High Plains Western Heritage Center and the Spirit of the Hills Wildlife Sanctuary.

Be sure to take the drive through Spearfish Canyon.  The
Spearfish Canyon Scenic Byway (Rt. 14A) runs from Spearfish to Savoy,
and you can continue on 14A through the town of Cheyenne Crossing to
Lead and Deadwood.   You can stop to fish or hike the trails.   The
Spearfish Canyon Lodge has a restaurant, bar, gift shop and restrooms
and is located right at the Roughlock Falls Trailhead, a pretty one
mile hike. 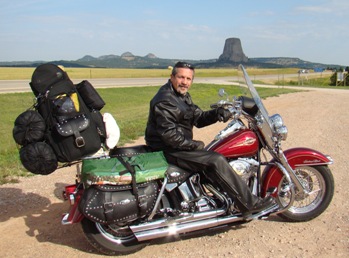 Location of the famed annual motorcycle rally held
at the beginning of August.   On one trip, we stopped by about a week before the
rally as the town geared up to host the expected 500,000 motorcyclists.
The town appeared to consist of bars, restaurants and vendor tents,
with makeshift campgrounds everywhere in the surrounding area. “Welcome
Biker” banners were in proliferation.   The Sturgis Motorcycle Museum
and Hall of Fame houses vintage motorcycles and an exhibit about the
“motor maids”, the oldest motorcycling organization for women
established in 1940. The Museum boasts a rare 1922 ACE motorcycle
designed by William G. Henderson after Henderson left the
Excelsior-Henderson Company.

Another year, we went to the Sturgis Rally on our motorcycle, riding from Cody Wyoming (where we were workamping), and took in all the festivities and madness.

Six miles south of Rapid City on
highway 16, this attraction was established in 1947 and claims the
world’s largest reptile collection. We didn’t get there, but the parking
lot was always full.

Bear Country: Eight miles south of Rapid City on highway
16, this is a drive through wildlife park featuring black bears, bison
and other North American animals. You won’t see any bears anywhere else
in the Black Hills.

Ellsworth Air and Space Museum East of Rapid City,
showcases aircraft used by the airforce base, including a full scale BIB
bomber. There is a tour of the base and a Minuteman Missile Silo
training facility.