Bryce: Land of the Hoodoos 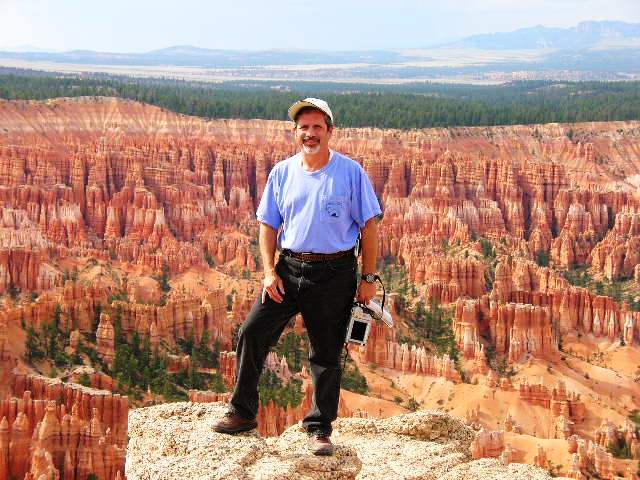 Bryce National Park was another adventure in amazing scenery. Here is our bottom line on seeing the park.

A good first stop is the Visitor Center (elevation 7894 ft.).
You could make this stop later in your visit, but if you see the film
and museum first, you’ll know what features to look for when hiking or
touring around the park. And if you have kids traveling with you, be
sure to get them involved in the Junior Ranger program at the start of
your visit.

The central part of the Park is called the Amphitheater Region. A free,
but not mandatory, shuttle runs between the main locations along Bryce
Canyon. These include the Visitor Center, Bryce Lodge, a few
campgrounds and the popular Sunrise, Sunset, Inspiration and Bryce Point
overlooks. Outside the Amphitheater, the scenic drive continues south
to the end of the canyon.
Probably the most common way to tour Bryce is to make the scenic drive.
The National Park Service suggests you drive straight through to
Rainbow Point at the end of the drive. Then, on the return trip, you
can pull off to the right side of the road into the many scenic overlook
points. All of the scenic pullouts are located on the right side of
the road when headed northbound, so it makes sense to do it this way.

Plan on at least two to three hours to make the Scenic Drive. Make sure you have the Park Guide (called The Hoodoo)
and the brochure, so you have a map of the stops and some descriptions
of various viewpoints.   You can also refer to the map so you know which
stops have restrooms or picnic areas. Take a lunch or snack and make it
a leisurely tour.   Walk some of the trails along the way and it can be a
full day.

As we have found with most of the National Parks, it is worth taking the time do some exploring on foot.
If you are up to doing a hike, do so.    If a long hike isn’t your thing,
you can walk along part of the Rim Trail within the Amphitheater section
and take a shuttle back to your starting point.    There are also
walkways at some of the overlook points that provide awesome views. In
particular, Inspiration Point has a short but steep walk up to its
highest overlook point that is well worth the climb. 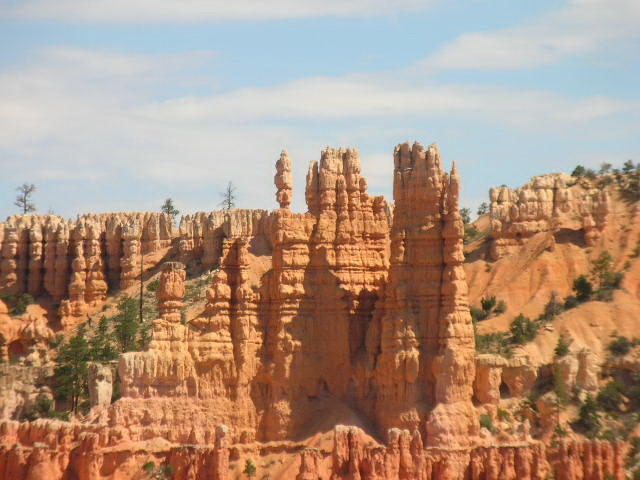 We took two moderate hikes that gave us a close-up perspective on the interesting hoodoos in Bryce Canyon:

Around the park, we found ourselves singing the modified lyrics to the Cole Porter standard, You Do Something to Me…
you know the one that goes ..”..you do that hoodoo that you do so well”
. We wondered if anyone else sings that song while in this magical park.

There are a variety of campground choices in and around Bryce National Park.
When we were there, we stayed in an RPI membership park in Panguitch because it was cost effective for us to do so.
Other alternatives include the North campground and Sunset Campgrounds (no hook-ups) in the park itself.
Right outside the park gates and accessible by the shuttle is Ruby’s Campground.   Bryce Pioneer Village is a Happy Camper Park
in the little town of Tropic.
There are several campgrounds in Panguitch.

There is also a campground in Red Canyon – another scenic area between
Panguitch and Bryce.   Red Canyon has a Visitor Center that showcases the
Dixie National Forest with an extensive photo display of local flora.
There are some hiking trails in Red Canyon and a 5-mile paved bicycle
path.

More on places to RV in southwest Utah…