A Fruitful Stay in Capitol Reef 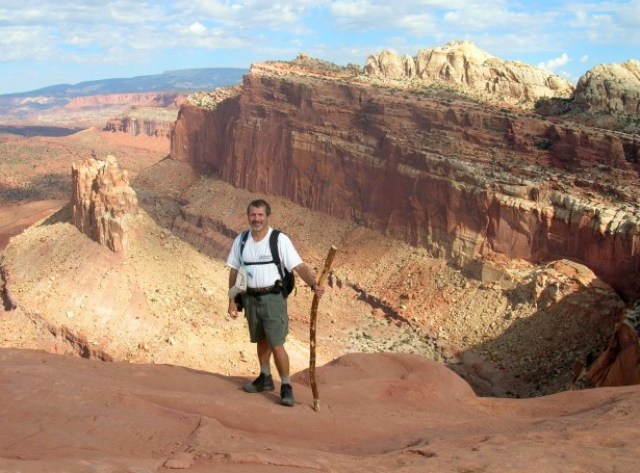 Capitol Reef National Park in Utah is on the northern edge of the Grand
Circle of National Parks. Somewhat remote, and perhaps not as well
known as some of the other parks, it encompasses a 100-mile natural
upheaval in the earth’s crust known as the Waterpocket Fold.

The Navajo call the area the Land of the Sleeping Rainbow, an
accurate depiction of the many hues of the landscape of Capitol Reef.
The “capitol” comes from the white domes of Navajo sandstone that
resemble capitol building rotundas, and the “reef” comes from the rocky
cliffs that are a barrier to travel, like coral reefs.

We enjoyed our visit – in fact, we had a “fruitful” stay, in more ways than one:

In the summer, starting out early can make all the difference in hiking
enjoyment. Another tip is to look out for the rock cairns, which are
small stacks or rocks that have been placed to mark the trail in places
where you are traversing rock and there is no discernible path.

Here are the trails we hiked in Capitol Reef (none of these are loops, they are trails where you return the same way you came):

We made a few scenic drives:

We left Capitol Reef reflecting on homemade pie and panoramic vistas …as well as a stash of peaches for the road.

More on our Utah RV Travels: