Western Cascade Mountains
(and things to do near Eugene, Oregon)

We got out to see the western Cascade Mountains while we were in the
Eugene Oregon area for some service work on our motorhome.

This western part of the Cascades that we explored is east of the
Eugene/Springfield downtown centers. For the most part we were in the
Willamette National Forest, crossing into the Deschutes National Forest
for a bit.

Different forests and wilderness areas make up the various parts
of this extensive interior Pacific Range in the Northwest states. In
fact, the Cascade Mountain Range extends from northern California
through Oregon and Washington into British Columbia, Canada.
A good guide to explore this region is this
Field Guide to the Cascade Mountains.

Based on those places we had a chance to explore, here are some
ideas of things to see and do in the Willamette River Valley and western
Cascade Mountains:

Pick up a Bicycle Map of the Eugene/Springfield area and
take advantage of the many miles of cycling routes. Eugene is
bicycle-friendly with paved biking/walking trails and regular roadways
with wide bike lanes. There are paved trails on either side of the
Willamette River and throughout the city.

The Santiam-McKenzie Pass is a scenic drive in the
Western Cascade Mountains that is well worth making.

It is about a 90
mile loop, so you start and end in the same place.   In our case, we
picked up some trail maps at the McKenzie River Ranger Station on State
Route 126 eastbound and began our drive from there.   You can also
intersect the loop in Sisters, by driving east from the Corvallis/Albany
area on U.S. Highway 20, or east from Salem on highway 22.

Make sure you have gas before you make the drive, and give yourself
plenty of time for a leisurely pace with stops along the way.

A few highlights of the drive:

The McKenzie River itself has been aptly designated as a Wild and Scenic River.

Belknap Springs: This small hot springs resort is located on the
McKenzie River with RV sites for about $20/night. It is worth a stop
to walk through the gardens, or you can use the hot-spring-heated pool
for a modest hourly or day use fee.

Sahalie & Koosah Falls: Two roaring falls that
spill off the edge of basalt cliffs. A short trail connects the two
waterfalls, with nice views of the McKenzie River. Both sites have a
parking area with interpretive panels and access to the falls.

Clear Lake: Is a very clear lake formed quickly by a lava flow that dammed spring-fed streams at the headwaters of the McKenzie River.

Mt. Washington Overlook: A great view of 7794-foot Mt.
Washington. This Cascade Mountain peak has a sharp jagged look due to
its volcanic structure and glacial activity.

Three Sisters: Near the town of Sisters on the loop, you
will get a look at the Three Sisters peaks. After Mt. Hood and Mt.
Jefferson, the three highest peaks in Oregon are the snow-capped North
Sister, Middle Sister and South Sister.

Windy Point: A scenic viewpoint at a huge lava flow right
next to the forested wilderness, with a good view of Mt. Washington and
other peaks of the Cascade Mountains. 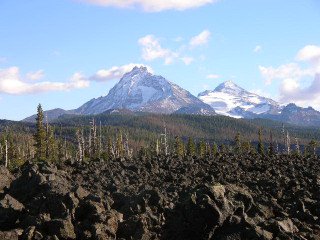 Lava Beds: The southern part of the byway winds through a barren lava field. At the McKenzie Pass summit, stop at the Dee Wright Observatory.
This stone memorial named for the foreman who headed the project
offers panoramic views of the Cascade Mountains. Be sure to go inside
to look through the individual lookouts for each of the major
surrounding peaks.

There is also a half-mile interpretive trail that allows visitors
to walk through lava flows with great vistas of the surrounding
landscape.

Belknap Viewpoint: From here you can see the Belknap Crater Complex formed by fields of lava vents that erupted profusely about 1500 years ago.

Proxy Falls: Take the trail into see the Lower and Upper
Proxy Falls. The Lower Falls is the most impressive and photogenic. In
Fall, take note of the striking colors of autumn leaves against the
dark lava along the first part of the trail.

Another drive is the Aufderheide Memorial Drive.

It travels along
the South Fork of the McKenzie River and the North Fork of the
Willamette River for about 70 miles.   It is less dramatic than the
Santiam-McKenzie Pass drive, but it is scenic nonetheless.

You can pick up a driving tour audio tape or CD at either end
of the route and return it at the other end.   On the north end of the
route, the tape is available at the McKenzie River Ranger Station off
route 126.    On the southern end, go to the Ranger Station in Westfir.
Nearby business establishments also act as distribution/drop off points.

One interesting spot along the drive is Terwilliger Hot Springs.
There is a  charge per person to enter the clothing optional springs.
Probably not something you get to do everyday!    A short trail leads to a series of six soaking pools laid out in
terraces down the ravine, with varying water temperature from 105 to 116
degrees.   As you might expect, no cameras allowed and gawking is
discouraged by the fee.

Outdoor activities are popular in the Western Cascade Mountains
and the scenic McKenzie and Willamette Rivers.

Mt Pisgah Arboretum is another place to take a
nature walk or short hike to the summit.    It is part of the Robert Buford
Recreation Area in the southern part of the Springfield area.

Check out the Saturday Market in downtown
Eugene.    Located near Oak and 8th, this is an outdoor market with
artisans selling a variety of handcrafted items.    There are also vendors
selling local produce, baked goods and flowers.    The food court section
offers a great variety of ethnic selections. And you might catch some
musicians performing as well.

Downtown Eugene is worth exploring – look for local events and venues.

More in Oregon: Read about or RV travel along the Oregon coast.