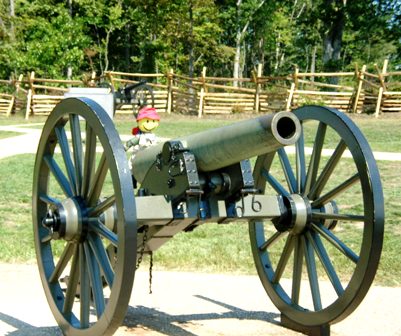 We thoroughly enjoyed our day trip to Gettysburg. If you are an
aficionado of the American Civil War, this is a must-see destination.
We drove around the town to see some of the architecture and remaining
evidence of the great battle that took place here.    Some buildings have
been restored to what they were like in 1863.     Some still show the
bullet holes that they received during the battle.

The main attraction is the immense battlefield — it covers about 25 square miles.     Most people see the battlefield by car or tour bus.    An excellent way
to the tour the battlefield and get a sense for the history surrounding
the encounter is to employ one of the licensed guides available at the
Gettysburg National Park Service Visitors Center.   The tour lasted about 2 hours
and we were delighted that we took it.    George, our guide, was able to
help the battle come to life with his insights and explanations of the
events that brought the opposing Armies together.

He showed us numerous diagrams, one or two for each day, of how
the opposing forces were arranged each day and the development of the
battle throughout the 3 days of the great struggle.    Our guide gave us a
deeper understanding of the historical importance of the battle than we
would have ever been able to get on our own.     After the tour, we drove
around again by ourselves to take some pictures.     And we could have
easily spent another day looking in detail at more of the monuments.

We also recommend taking advantage of the National Park Service ranger
programs.   We took the cemetery tour and it was very informative.    The
ranger was excellent in telling of the historic commissioning of our
country’s first national cemetery.     He also spoke about the battle, the
combatants, and weapons that were used.    He painted a verbal picture of
the conditions people experienced before, during and after the battle.
We also enjoyed his wonderful explanation of the Gettysburg address and
how carefully Lincoln crafted the references in his text.

In summary, one day is not enough time to cover the battlefield,
town and history but it does provide an appreciation for this important
part of American history.

If you can spend more time (and money), here are some other places to see:

The American Civil War Museum depicts the leading
personalities, political, economical and social aspects of the war.
Throughout five hallways of scenes, the American Civil War Museum
recreates history with life-sized dioramas of the Civil War. In the
digitally enhanced multi-media Battleroom Auditorium, visitors will see a
life-sized recreation of the Battle, followed by President
Lincoln’s Gettysburg Address. There is also a gift shop at the museum,
located at 297 Steinwehr Avenue.

The Jennie Wade House Museum: Authentically furnished,
this house is a tribute to the only civilian killed during the battle,
and remains much as it did over 140 years ago.

The Jennie Wade house, originally the McClellan home, survived
the battle and witnessed the tragic death of a 20-year old Gettysburg
civilian Jennie Wade, as she was preparing bread for the Union soldiers.
This house, located amidst the fighting between both armies, was
struck repeatedly and riddled with bullets. It is now a museum and
contains a gift shop in the rear. It is located on the southern end of
Baltimore Street as you approach Cemetery Hill.

displays a large collection
of artifacts and memorabilia from not only the Civil War but other major
American conflicts. It features beautifully crafted miniature dioramas
of ten major conflicts of the Civil War, as well as a life-sized
narrated Confederate encampment. Located at 777 Baltimore St.

The Lincoln Train Museum highlights President Lincoln’s
visit to Gettysburg from Washington D.C. This attraction features
over 1,000 model trains, dioramas illustrating the role of railroads
during the Civil War, and a simulated ride with the President. There
is a gift shop with a variety of railroad memorabilia. Located at 425
Steinwehr Avenue.

Boyds Bear Country: For the young at heart, “The World’s Most
Humongous Teddy Bear Store” is a fun-filled experience for kids of all
ages. See the History Hall, take the self-guided tour, build a bear in
the Factory, adopt a bear from the Nursery and get a “beary” nice photo
in the Portrait Studio. There are eating venues and four floors of
shopping. Located off just south of town, off Business Route 15 at 75
Cunningham Road.

Hall of Presidents: A collection of Presidential wax
figures, using light and sound, tell the story of America. The
Smithsonian Collection of First Ladies Inaugural gowns is authentically
reproduced in the Hall of First Ladies. Also see the “Eisenhowers at
Gettysburg” exhibit, which highlights the years the Eisenhower family
spent on their nearby farm.

There are other museums and various walking tours around historic Gettysburg, as well as themed places to dine and shop.