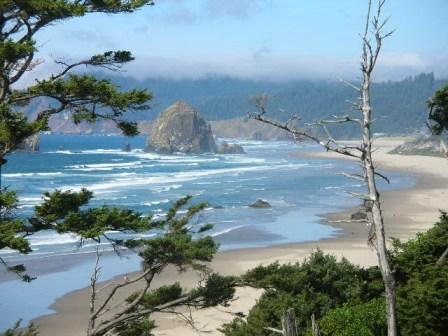 It was late summer when we made our first RV trip to the Oregon coast. Around each bend of the road were magnificent views of the Pacific Ocean. We had expected to see the rocky coastline, but we were surprised to also find broad, flat and seemingly never-ending beaches.

We traveled into Oregon from Washington, driving along the scenic Columbia River gorge toward the coast. This is a great drive on either side of the river.

Our itinerary was planned to make use of our Thousand Trails parks along the Oregon coast. We stayed at the Seaside and Pacific City Parks along the Northern Oregon Coast, and then headed to the Central Oregon Coast to the Whalers Rest Park in Newport, Oregon.

All three of these parks were conveniently located not far off Route 101, enabling us to take our time traveling south and exploring the local areas. Aside from Thousand Trails, there are numerous other privately-owned, federal and state campgrounds along the Oregon coast.

Here are some things to do and places to visit in these areas, listed from north to south:

Don’t miss the interesting and much photographed Haystack Rock, which rises 235 feet above ocean level. Take a walk on Cannon Beach to see this Oregon Coast landmark up close.

The charming town of Cannon Beach attracts visitors all year long with its upscale shops, galleries and numerous restaurants.

Manzanita is a small seaside community with a 7-mile beach that extends between Neahkahnie Mountain to the north and Nehalem Bay to the south. Neahkahnie Mountain has a trail that leads to the top for a spectacular view of this beach. There is also a great view from the roadside overlook on Route 101.

The scenic drive southward along Route 101 will take you though a bunch of small towns. Nehalem is a quiet riverfront town. Wheeler is on the Nehalem Bay. Rockaway Beach has a 7-mile beach extending between Nehalem and Tillamook Bays. Garibaldi is on the northern edge of Tillamook Bay. Bay City is known for its seafood, especially oysters.

Tillamook is known for the namesake brand of cheese. Be sure to visit the Tillamook Cheese factory to learn how cheese is made, have some samples and indulge in delicious Tillamook ice cream. Also stop at the Blue Heron French Cheese and Wine Company. You can sample wines, cheeses, dips and jams, have lunch, browse the gift shop for gourmet foods and see the farm animals in the little petting zoo.

Another popular sight in Tillamook is the Air Museum, housing one of the country’s top WWII collections with more than 40 aircraft.

You can’t miss the building – the 7-acre hangar is listed in the Guinness Book of World Records as the largest clear-span wooden structure in the world.

Other sights are the Tillamook County Pioneer Museum and the Latimer Quilt & Textile Center.

Take the Three Cape Scenic Loop west of Tillamook to Oceanside, Netarts and southward. Along this drive, plan to make a few stops. See the Three Arch Rocks Wildlife Refuge off this section of Oregon coast and the lighthouse and Octopus Tree in Cape Meares State Park. Just north of Sandlake at Cape Lookout State Park, you can hike the 5-mile round trip trail to the end of the cape for views of the Pacific and Oregon coast. A bit further south is the Cape Kiwanda and Pacific City area. This was a dory fishing community that now has a number of shops and restaurants. The beach has its own smaller Haystack Rock and a sand dune you can climb.

Back on Route 101, the next big town is Lincoln City, with plenty of commercial establishments. Tourist attractions include the Chinook Winds Casino, Connie Hansen Garden, Tanger Outlet Center and the watercraft rentals available at Blue Heron Landing.

The town of Depoe Bay is worth a stop. Take a look at the crashing waves in Boiler Bay on the north side of town, where you might spot whales feeding on the kelp. Also stop along the seawall in Depoe Bay for a nice view and a visit to the Depoe Bay Whale Center exhibits or perhaps the shops across the street.

Driving southward along the Oregon Coast, stop to see Cape Foulweather and the Devil’s Punch Bowl.

About 12 miles north of Florence, you will come to the Heceta Head Lighthouse. There is a trail from Devils’ Elbow beach to the lighthouse. Another mile south are the Sea Lion Cave, the largest sea cave in the world and home to a colony of Steller sea lions. An elevator takes visitors down to the cave.

Florence has its commercial center and historic Old Town. Stroll along the waterfront shops, galleries, restaurants and historic buildings. The other not-to-be missed attraction in this area is the Oregon Dunes National Recreation Area. Be sure to see these gigantic dunes. A number of operators offer guided excursions and dune buggy rentals.

From here we headed inland to Eugene Oregon for the Country Coach Annual Reunion rally and some service work.

So for now, read about our journey inland from the Oregon coast.