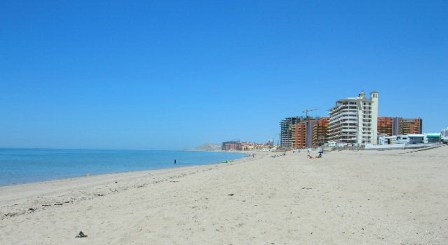 We next went to Puerto Penasco, or Rocky Point as it has been dubbed by the Americans. Sometimes marketed as “Arizona’s beach”, the signs of Americans taking over are obvious. High-rise condos are going up all along the main Sandy Beach. Further south from the Old Port, construction booms on many planned resort communities along the coast. The Mayan Palace is out on its own private expanse of beach and more luxury homes are going in around it. 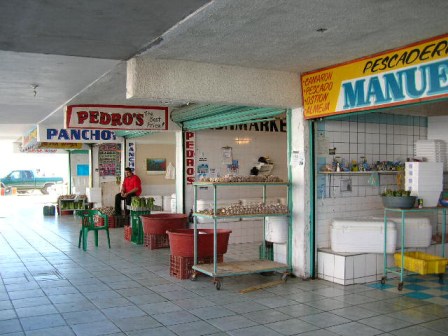 The Old Port of Puerto Penasco seems to have evolved into a tourist-focused place, with plenty of restaurants and shops selling Mexican and not-so-Mexican crafts and other wares. There is a string of fish markets and a decent Malecon (like a town plaza/walkway along the water). Bars target the party-hound. Real Estate offices are all over in Puerto Penasco. There are plenty of places to eat Carne Asada and Fish tacos. In peak weeks and weekends, ATVs can be rented to ride annoyingly through town and over the remaining section of sand dunes set aside for this purpose. 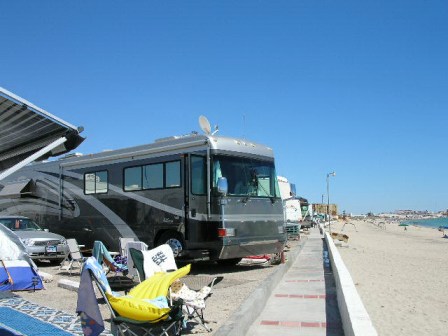 Puerto Penasco view of the beach

We stayed at La Playa Bonita RV Park, a popular RV park along Sandy Beach, which is a nice stretch of beach near town. The sites are close together, but we were happy to get one right along the beach. A walkway ran right in front of our site, leading to the restaurant located between the RV park and the adjoining La Playa Bonita Hotel. Vendors also frequented this walkway – if you are interested in buying, they are there. If not, then a simple “No Gracias” and they continue on their way. 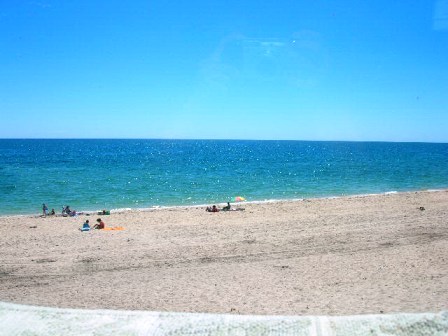 Overall, we had a pleasant stay in Puerto Penasco – a nice park with a great view and beach, friendly neighbors and interesting things going on along the beach. However, there is limited feel of Mexico here.

So after we left the Americanized town of Rocky Point, we went into a few remote towns to see what that was like. We spent a couple nights at a large Pemex in Caborca and drove to El Desemboque and Puerto Lobos. We can’t think of anyone we know that we would recommend these side trips to – but there may be other nuts like us. It helps that we can speak Spanish. El Desemboque has a paved road leading past fields scattered with garbage to the town. Once there, it is a town of dirt roads and an assortment of shacks and houses. It has a beachside hotel with restaurant and a beautiful beach. And a lot of flies in town – due to the fish or the garbage or both. Some houses showed pride of ownership and seemed to care for garbage issues. Others did not. In any case, this place will no doubt continue to grow and improve as the rumored coastal highway makes its way beyond Puerto Penasco.

Puerto Lobos is far more remote with no water or electricity. People use generators and water and propane need to be carted in. Puerto Lobos is at the end of 50 very long miles of bone-jarring dirt road through a protected wildlife refuge. There are some American-owned seasonal homes out there, but the town was mostly deserted the day we were there. We spoke to a few people and actually had some delicious fish cooked on a wood-burning stove at an outdoor kitchen. Before our meal was cooked and served, the counters were wiped clean with chlorine bleach to discourage the flies.

In contrast, Caborca is a big town with good roads and a variety of stores. There are signs of ongoing improvements being made in town and some very nice homes.

After these side trips and our stay in Puerto Penasco, we were off to Kino Bay.