We headed to Sioux Falls, as we had some business to care for to make SD our home base state, and we wanted to take in a bit of the city itself while we were there. We had planned our itinerary such that we would be in town while they were holding their annual Hot Harley Nights (Harley parade, judging, music and food) and Hot Summer Nights (more Harleys, plus lots of Corvettes, music and food). While attending these street festivals, we found the downtown area to have a bit of a friendly small town feel amidst the cultural style of a sizeable city.

Here are some fun facts: 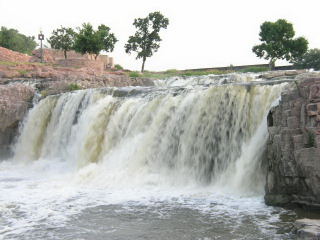 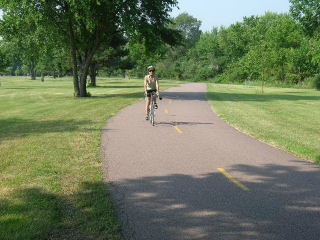 We visited the namesake Falls – it is worth it to visit Sioux Falls Park and the observation tower. We think the nighttime laser show needs a revamp.

We also took advantage of the nice paved bike trail which passes through about a dozen city parks.

An interesting and free activity is to take in the many sculptures that are part of Sculpture Walk. You can hardly miss them if you are strolling around downtown, or you can download a Sioux Falls guide map.

Some other ideas for things to see are the Great Plain Zoo, Delbridge Museum of Natural History, the Courthouse Museum, a trolley ride, self-guided historical waking tours, Sertoma Butterfly House and the Pettigrew House and Museum.

Outside of the city, you can visit some of the other destinations in southeastern South Dakota.

To the south is the Yankton area and Lewis and Clark Recreation Area. North of the city are the quartzite cliffs of Palisades State Park and Dell Rapids. Big Sioux State Park is right near the city itself.

You can hike, fish, visit historical exhibits and festivals. And there are plenty of golf courses in the area.