It is possible to mistake the faintly white (like water vapor) smoke released from your car during cold weather as white smoke.

However, while that can be considered thin white smoke, the type of smoke we focus on in this article is thick white smoke.

The smoke from your car exhaust says a lot about the health of your car. Consider it an SOS signal when your car emits colors of smoke other than thin white smoke.

Before we study white smoke from your exhaust in detail, it would do you a lot of good to understand your car’s mechanics. The better you understand cars, the easier it would be to diagnose mechanical problems or fix them when the occasion demands it.

Understanding the mechanics of the exhaust system would help every car owner know what’s worth and what is not worth their worry. The fumes generated by your vehicle’s exhaust systems are by-products of the engines’ internal combustion.

A catalytic converter makes these fumes less harmful, and a muffler reduces the accompanying noise from the exhaust. Based on these mechanics, you should never have to see the fumes coming out from the exhaust of your vehicle.

Except it’s white vapor resulting from cold weather, any other fume (irrespective of color) means your vehicle has a problem. Pro tip: the water vapor elapses after a few seconds; the moment your engine warms up from revs, the fume ought to stop. 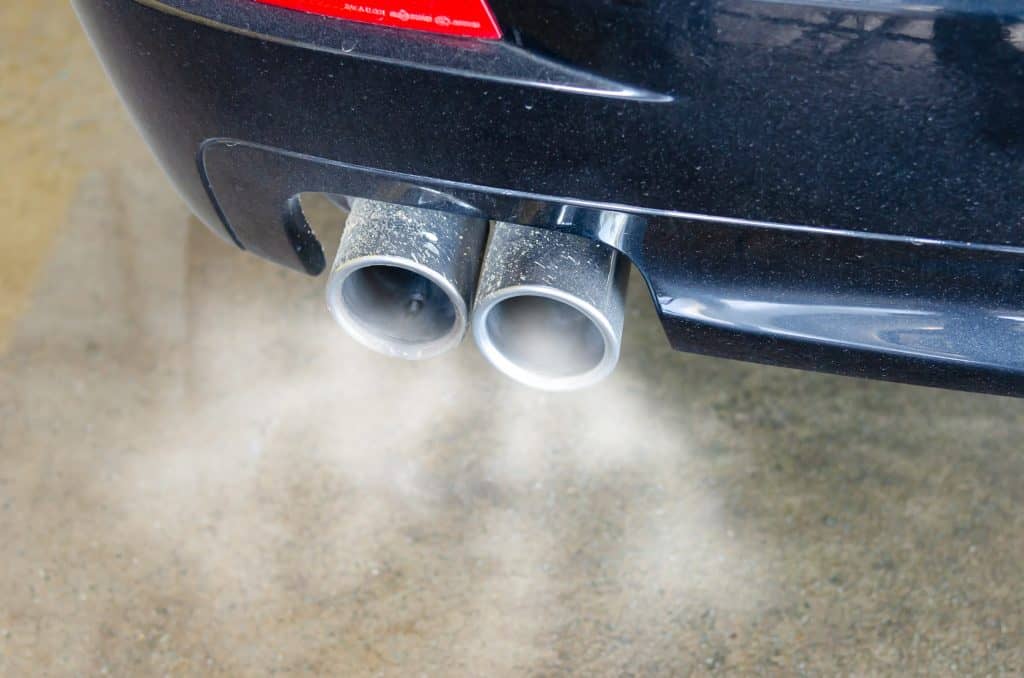 Thin white smoke mostly indicates no cause for alarm.

There are various colors of smoke emitted by your exhaust when there’s a mechanical problem. Depending on the problem, you may see white, blue, grey, or black smoke from your exhaust.

Each of these smokes is symbolic of a possible problem with your vehicle.

This article emphasizes the white smoke, its causes, possible diagnosis, and how to fix it. Let’s get right at it!

Before we dive into white smoke, you can learn a thing or two about other smoke colors.

There are varying colors of smoke you might see from the exhaust of your car. Asides from white smoke, you could observe black or blue smoke. Black smoke indicates a problem with your fuel system, and you’d be burning more fuel than usual when your exhaust emits black smoke.

Blue smoke, on the other hand, indicates that your car is burning more oil than usual. The moment you observe blue smoke, keep track of your oil consumption, and top the oil regularly. If the damage makes way to the combustion chamber and Is extensive, you’d have to spend significantly on repairing the leakage and other damaged parts.

Gray smoke from your car’s exhaust could mean that your PCV valve has failed or there’s excess oil in your car. If your car is an automatic car, the odds exist that one of your transmission fluid is leaking. A bad turbo charger can also cause grey smoke from your exhaust.

For starters, the car exhaust ensures that harmful gases from your car engines are safely released. They are your “car lungs.” Generally, white smoke being released from the car exhaust can be classified into two:

Suppose you have experienced thin white smoke from your exhaust, especially during cold seasons like winter, that is perfectly normal and not a reason to worry.

Unlike thin white smoke, thick white smoke from the exhaust indicates some function failure that requires immediate repairs or replacement of faulty parts. If you continue to drive the car in that state, you will risk costly and severe damage to your car engine.

Thick white smoke from exhaust might indicate that coolant or water has unintentionally entered the combustion chamber (an enclosed space in the car where air and fuel mixture is burned), which they should never have. When water or coolant has burned within the engine block (a part of the internal combustion engine), it produces thick white smoke that leaves through the exhaust.

What does white smoke from the exhaust say about your car?

White smoke from your car exhaust means water/coolants have found their way to the combustion chamber of your engine.

You’re at risk of overheating or worse, damage to your vehicle if you do not diagnose and fix the possible issues with your car. Overheating would ultimately damage the engine of your vehicle.

To determine if you’re dealing with a faulty head gasket or engine crack, check your car’s coolant level. If it’s low and you can’t trace any leakage points, you would need to make some major repairs ASAP.

As discussed in the previous section, the standard diagnosis would be a faulty head gasket, a crack in the head or engine. 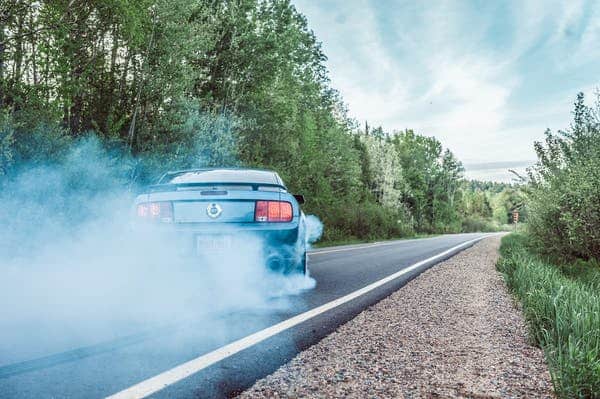 Subsequently, we will discuss the possible causes in detail.

The head gasket is an adhesive between the engine block and cylinder head. It is a barrier between engine oil, combustion, and the coolant. Thus, it helps prevent fluid engine leaks and pressure losses.

Engine blocks are mostly produced from either cast-iron metal or aluminum alloy, making them durable in constant heating conditions. There are very few cases of cracked engine blocks because damages occur in the head gasket before getting to the engine block.

However, the engine is a complex system that requires every component to function precisely. Suppose any engine components aren’t working as they should, it could cause the engine block to overheat and possibly crack, resulting in thick white smoke from the exhaust. 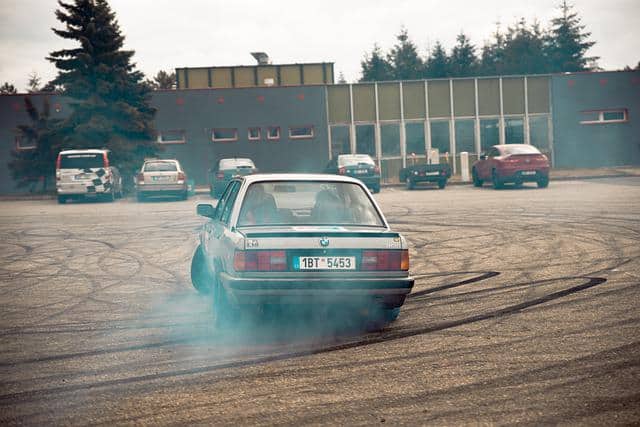 A cracked engine block can cause white smoke from the exhaust

Low-octane fuel could be one of the reasons why your gas head blows up, causing thick white smoke. In other cases, bad fuel could successfully crack the cylinder head of some engines. By default, bad fuel harms these cylinders by pushing them beyond their limit and causing a crack.

The damage occurs as a pre-ignition in the combustible chamber that increases pressure and damages the cylinder/gasket. Other factors that contribute to pre-ignition combustion include; advanced ignition timing or an old engine with ring wear that allows contact between oil blow-by and air/fuel charge.

Fuel-injected cars have oxygen sensors attached to the exhaust system. They are designed to regulate how much fuel is injected into the engines at a time. If vaporized antifreeze or coolants come in contact with your oxygen sensors, it can cause white fumes from your tailpipes.

When these coolants contact your oxygen sensors, they stop working, and a fault code appears. A prompt to check your engine from the dashboard should notify you of this damage. Changing the oxygen sensors would fix the glitch when you ascertain this as the cause of white fumes.

The engine control unit manages all the engine components and implements necessary actions. If there is a malfunction in the Engine Control Unit, the timing of fuel injectors might be imbalanced, causing white smoke from your car exhaust.

Buying a new engine or rebuilding your engine is one of the risks associated with persistent white fumes from your tailpipes. This does not mean the fuel injector is bad. It only means the engine control unit needs a reconfiguration to adjust the timing of the fuel injector.

Coolants are used to regulate the temperature of a car system. When the coolant reservoir tank has been damaged or cracked, it can leak coolant into the engine’s combustion chamber (a chamber where air and fuel meet).

The leaking coolant is heated within the cylinders, creating thick white smoke from the exhaust. A cracked coolant reservoir tank can result from fixing a problem close to the tank, causing accidental damage.

When the injectors that allow fuel into the chamber become stuck or start leaking, it ends up allowing too much fuel into the engine. The engine will then have to find a way to expel the excess fuel, causing thick white smoke from your car exhaust.

Other symptoms of a bad fuel injector may include your vehicle sputtering and shaking when it should come to a stop and when your fuel consumption is faster than average. To better understand glitches common with bad fuel injectors, check out 20 bad fuel pressure regulator symptoms.

This happens during the cold season or winter. Usually, when you start your car during this season, the smoke is thin and will burn out quickly after the engine warms up.

Thin white smoke due to condensation is perfectly normal

Pro Tip: Using too much boost for your car and poorly done gasket repairs could also account for white fumes. Always ensure that experts carry out the required repairs around your gasket/cylinders with utmost care and caution.

Usually, many vehicle owners find it hard to troubleshoot which of the many causes is the exact reason for white fumes from your tailpipes.

Although diagnosis is the mechanic’s job, it would help if you knew some bits and pieces. Sometimes, it saves you from novice or unnecessary expenses.

Certain defects in the mechanical components of your car can help you ascertain that a blown out head gasket is the cause of white smoke from your exhaust system. These defects include

All or some of these mechanical defects co-occurring means that a blown gasket head is likely the cause of white smoke from your exhaust.

If you suspect that the coolant entering the engine block is the cause of the white smoke, you should check the level of the coolant. Identifying a coolant leak is pretty difficult to do on your own. You can buy a block tester to aid your diagnosis.

If the coolant level is low and there are no other signs of leakage, the problem may be caused by a crack in the head gasket, cylinder head, or engine block.

How to Fix White Smoke from Exhaust

I suggest driving your vehicle to a reputable auto repair facility. White smoke from the car’s exhaust signals a problem with the engine. It would be difficult to fix whatever is wrong with your car on your own. You need an expert to attend to do this for you.

If the closest repair shop is far away, you’re better off turning off your car’s engine. This is in a bid to avoid destroying the engine of your vehicle. You can call for repair services to meet at your location or tow your car to the mechanic.

You should be prepared for the cost if the diagnosis confirms a blown head gasket. It would help to know how much a head gasket repair costs ahead of time.

Any fume other than water vapor is toxic to the environment. Even worse, it signals that your car needs an urgent mechanic check-up before the engine knocks down completely. You don’t want to deal with an engine knock; it’s expensive.

Fix your car today, and save the earth from toxic emissions through your exhaust!